Happy Wednesday, for those of you enjoying the National Day vacation I hope you are somewhere nice.

Today’s issue is brief and in a different format as there is just not much going on in China this week. We will be back to normal next week.

US Vice President Pence is giving a speech Thursday in DC to further expand on President Trump’s claims that Beijing is interfering in US elections. At the PRC embassy National Day Party in DC last week Matt Pottinger, senior director for Asian affairs on the National Security Council, told the crowd that competition is now at the forefront of the Trump Administration policies toward China. These moves look to be part of the broader rollout of a Trump Administration strategy to push back against China on all dimensions, and to be related to an NSC document I and others in DC are hearing about that examines CCP influence/interference operations in the US generally.

The Financial Times reported that earlier this year there was serious discussion about banning all US student visas for PRC citizens. An outright ban is unlikely but expect many more restrictions on visas for students in science and engineering.

PRC-US military relations are worsening. The sanctions against the PLA Equipment Development Department and its director Li Shangfu clearly struck a nerve in Beijing, perhaps even more so with Xi than the tariffs have. The U.S.–China Diplomatic and Security Dialogue scheduled for later this month has been postponed. A US FONOPS over the weekend in the South China Sea led to a Chinese warship coming within yards of a US destroyer (pictures of the encounter leaked here). If the US has video it should release it. The propaganda war matters.

US Secretary of State will stop in Beijing early next week on his trip to North Korea.

The US-Mexico-Canada deal to revise NAFTA clearly has elements targeted at China, including clauses about dealing with currency manipulation (The most important clause in Trump's new USMCA deal aims at China — Quartz) and veto power over free trade agreements with non-market economies (China ‘threatened with isolation’ by veto written into US-Mexico-Canada trade deal | South China Morning Post). China will be very worried that this deal will allow to the US to focus even more on prosecuting the trade war with China, with help from allies now.

The latest episode of the Intelligence Matters podcast features a good discussion between Michael Morell and Chris Johnson about the future of US-China relations.

There is a resolution in the disappearance of actress Fan Bingbing. Xinhua announced Wednesday that she and companies she controls have agreed to pay 883 million RMB in back taxes and fines by the end of the year. She will avoid criminal penalties if she pays by December 31, though her agent and “other related personnel” are under investigation for possible criminal offenses including destroying documents and other evidence.

Fan posted an apology (范冰冰就逃税事件致歉：对不起，我辜负了国家对我的培养) to her Weibo account, saying she let everyone down by not properly arranging the interests of the state, society and the individual. Fan said she would raise the cash to pay what she owes and that “all of her achievements are inseparable from the support of the state and the people. Without the good policies of the Party and the state, without the love of the people, there would be no Fan Bingbing.”

The Xinhua announcement (部门依法查处范冰冰“阴阳合同”等偷逃税问题 Chinese actress Fan Bingbing fined for tax evasion) made it clear Fan is not the only TV/film industry participant with a tax issue. They have been given until 12.31 to properly report and pay what they owe. The evaded taxes might fill some budgetary holes…

The official “Sword of Chang’an 长安剑“ Weixin account noted (长安剑：超8亿！范冰冰逃税被重罚！除此之外还有四大新闻) that the case reflected the naked worship of money in entertainment circles as well as the complete disregard for art, morality, personal integrity and the law.

Fan will probably be able to revive her career, though not without much more obeisance to the Party. Penalizing her makes a lot of sense, both because so much money is involved but also because she is the perfect target to use to reiterate the point that the Party is serious about cleaning up the entertainment industry both financially and “spiritually”.

I wonder if we are due for another big meeting on the arts and literature chaired by Xi?

Xi, also Chinese president and chairman of the Central Military Commission, made the remarks during a research trip from Tuesday to Friday to the provinces of Heilongjiang, Jilin and Liaoning.

To revitalize the region, China should implement a series of policies made by the CPC Central Committee, stick to the new development philosophy, forge ahead with determination and an open mind, maintain targeted and continued efforts, deepen reform to tackle contradictions and make good use of advantages while avoiding shortcomings, Xi said at a symposium during the trip.

Han Zheng, a member of the Standing Committee of the Political Bureau of the CPC Central Committee and Chinese vice premier, attended the symposium.

Xi Jinping, general secretary of the Communist Party of China Central Committee, has stressed efforts to strengthen the military training and war preparedness of the armed forces and improve its capability to win wars.

Xi, also Chinese president and chairman of the Central Military Commission (CMC), made the remarks Thursday while inspecting the 79th Group Army of the People's Liberation Army (PLA).

He said it was important to deepen the implementation of the Party's thinking on strengthening the military in the new era and military strategy for new conditions.

Xi visited the training ground of an aviation brigade of the Group Army and looked delighted to hear about the innovation in command and coordination, battle strategy and equipment update. 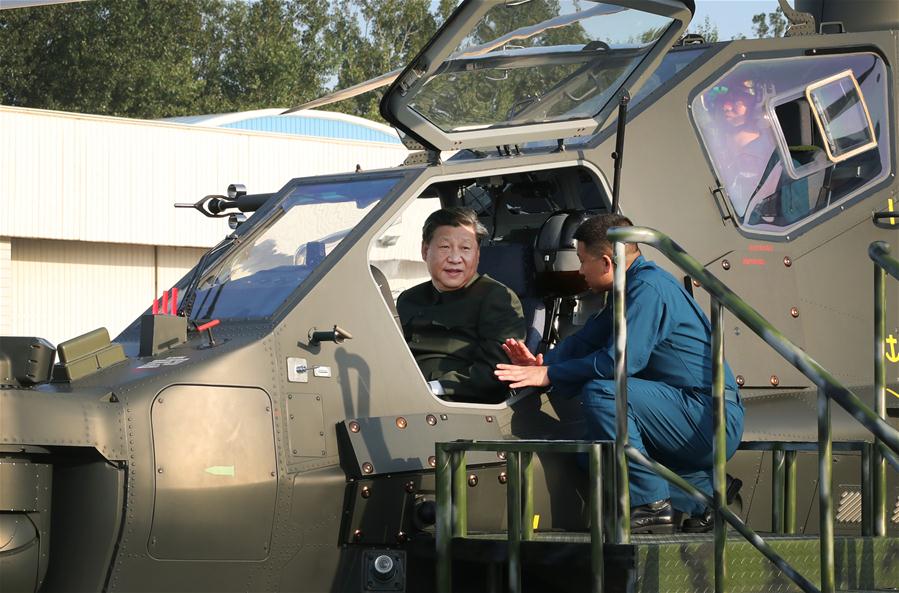